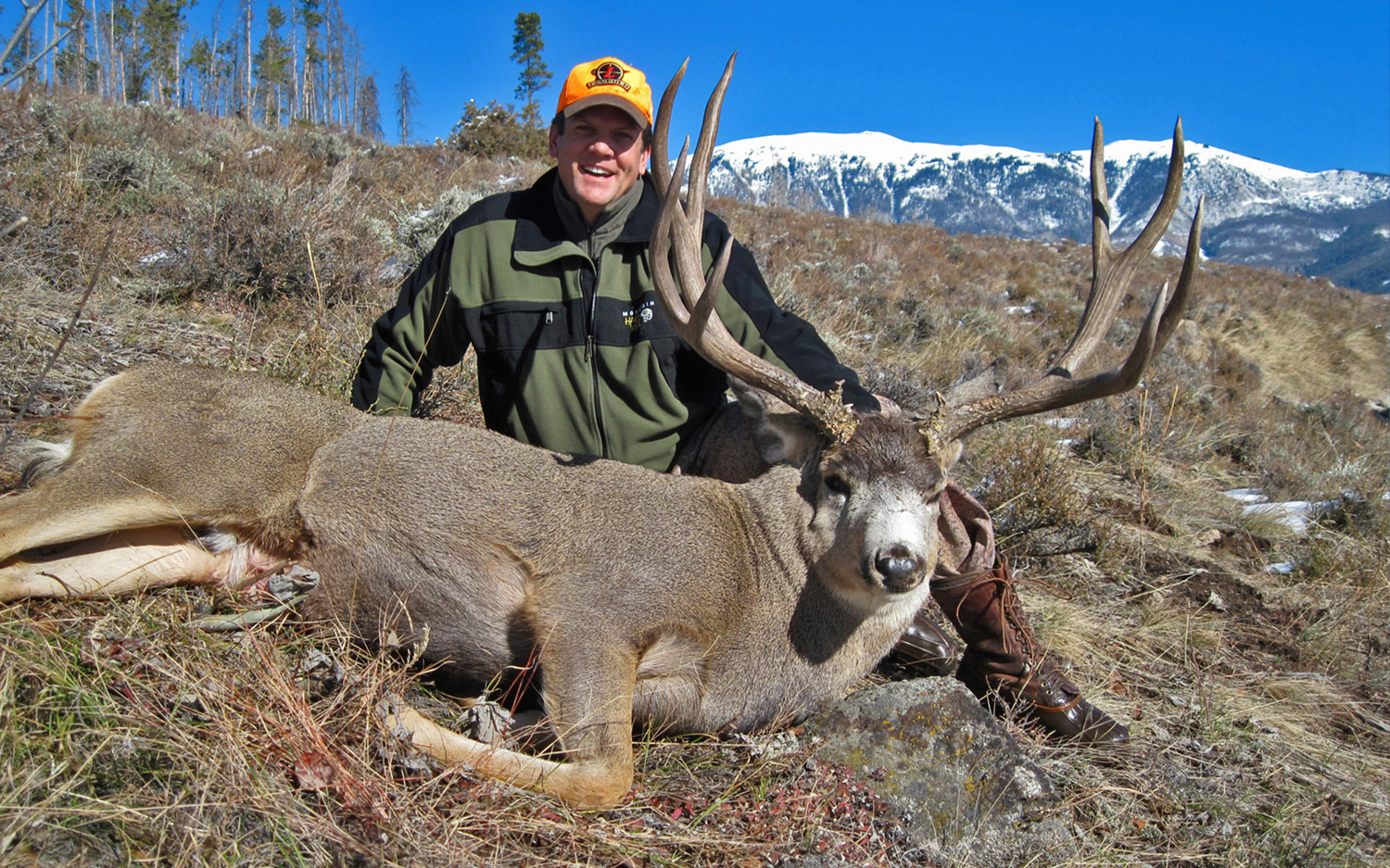 At a previous Western Hunting & Conservation Expo in Salt Lake City, I had a chance to visit with quite a few hunters that came by the Western Hunter and Wilderness Athlete booth at the show. Meeting people and sharing stories was what these interactions were about and I also got to receive feedback on the book David Long and I just co-authored, The Edge: The Complete Approach to Hunting Mountain Mule Deer.

Perhaps the most satisfying moment was when a young man came up to me, introduced himself, shook my hand, and told me about killing the biggest buck of his life.  He said he felt that reading our book helped him put some of the pieces in place and gave him a shot of confidence to make it happen. When I asked to see a photo of the buck, he beamed with pride and a huge smile as he handed me his phone and shared the image and the story.

I pictured myself as this same young man, eager and hopeful, wanting badly to find his own great buck and fulfill a dream fueled by many hours of preparation, effort, and hard hunting. I remember when I finally found my first mature buck and how I felt walking up to him lying on the bitterbrush and timber hillside. It’s a feeling I hope others get to experience and it’s my intention to help them get there.

There are some basic tips in hunting that all apply to being successful and there is also information that is more nuanced to hunting mule deer. For instance, as a general rule in hunting, don’t let them smell you if possible. For hunting mule deer, it’s a great idea to be in your hunting spot before first light so you can be sitting, watching, and glassing in the hours that deer are most active.

If you’re hunting for older mule deer with bigger racks, the same basics apply, but instead, you’re narrowing your search to a small representative segment of the population. Even where there are a lot of big mule deer, there still aren’t a lot of them. If that sounds like circular logic, just know that big bucks are hard to come by and it doesn’t get any easier with each passing year.

Hunting for younger bucks is much easier than holding out for a bigger, older buck for two primary reasons. One is that younger bucks vastly outnumber mature mule deer, so there are a heck of a lot more forkies and small four-points than huge, heavy-antlered old bucks. Reason two is the surviving older bucks have seen it and done it and are incredibly wary until the rut.

If you’re looking for a better-than-average mule deer buck, you’re probably looking for a buck four years or older. This is where research, math, and playing the odds come into play. In areas of heavy hunting pressure, good numbers of animals, and easy access, bucks are simply culled out of the herd by hunters every year. By the time a buck reaches four years of age and older, there are few of them left in the population. This is a dynamic situation and can vary greatly in time even in areas that are managed for similar populations and buck-to-doe ratios from year to year.

For example, the area in which I live is called “Middle Park” and is located in north-central Colorado. It’s a series of high sagebrush valleys that funnel together at roughly the place where the Colorado River meets the town of Kremmling. It’s a place of brutally cold winters and occasional heavy snowfall, but it contains lush summer range at higher elevations that mule deer and elk love.

In the 20 years I’ve lived here, I’ve seen deer populations grow to high levels with many impressive and mature bucks on the winter range. I’ve also seen times of near decimation, such as the years that followed the winter of 2007-08. Tag numbers are cut and added by state wildlife managers, but the situation is dynamic in that there never seems to be extended times of static populations and buck numbers. In my observations this winter, buck numbers were down and mature bucks were very hard to find…and this was in a big snow winter with deer much more concentrated at lower elevations. Tag allocations were also at the high end the last few years and hunting pressure resulted in the harvest of lots of bucks.

This kind of situation gives hunters the opportunity they crave in easy tag availability, but can be very frustrating when animals aren’t seen and bucks are difficult to find. I know hunters who hunt the area every year and some occasionally take nice bucks. They unintentionally play the long game, wanting opportunity and sacrificing quality, and take a decent buck every few years just by hunting hard and spending time in good deer country.

There is something to take away from this. Research and knowledge can help narrow down the times to apply for hunts like this that are easier to draw than some with big preference point requirements or those with poor draw odds. All of this information is available from state wildlife managers and online.

It’s a silly approach to call a biologist or game warden and ask them where you should hunt. You’re just one of dozens of people asking the same question, and expecting him to send you to the different spot than the guy from Minnesota that called an hour ago is a bit much. Instead, ask him about severity of winters, tag numbers, winter counts, and hunter numbers. There is an opportunity to get far more valuable information instead of an X on the map that they have given the last 15 callers.

Use Your Info Wisely

Winterkill is real and there are tough winters in the West that affect states and areas more than others. In Colorado, the area roughly north of Interstate 70 often suffers more. An informed approach that includes researching population trends, buck-to-doe ratios, winter weather patterns, and tag allocations can be the key to hunting these areas at the right time.

Developing a plan to have three or four areas in mind that you can key in on and watch might give you an advantage of hunting an area at a time when conditions lend themselves to a higher chance of success for a mature buck.

I feel that the most glaring example of this is the state of Montana, which has very liberal late-season mule deer hunting. Season dates run through the Sunday after Thanksgiving, taking in the entire rut, and Montanans have been reluctant to let go of that tradition. Because of this, the best mule deer hunting in Montana these days is often strictly on private land where hunting pressure is controlled.

One of the best hunters I know drew a special late-season buck tag last fall near Bozeman. He didn’t find a single buck on his hunt that was as big as many of the bucks I pass up every year hunting Colorado. This ended up being an example of how we can sometimes end up investing our efforts in less than optimal opportunities.

Managing hunting pressure is key to having any mature buck age class representation in any herd, regardless of what state you hunt.  You can’t hunt for a buck that simply isn’t there.

As a general rule, bucks need to live past four years of age to get big. They need to live to seven or eight years of age to be considered old. Most bucks reach body size maturity at around five, and it’s after this age that they put more energy into antler growth, because they are putting less into building body size.

If you want a big mule deer, you must start your search in places where more of them are likely to reach maturity, but also in a place you can get a tag. Assuming you’re hunting public land, look for a combination of conditions or events that allow this and get the edge you need to be successful on mature mule deer.

Colorado Mule Deer in 2021
Karma Buck
37 Years, 361 Days
Antlers and Acorns
Are You Ready for The Grizzly?
Traditional Triumph
Off-Season Training Tips
State of Mind
1 2 3 … 5 Next »