As I crested the 9500-foot ridge on September 30, I was feeling deflated. I had made a long climb in the dark up one of the steepest mountains in the area, and as I crested the ridge, I was expecting to be serenaded by bugling bulls. Instead, I was only greeted with a beautiful mountain setting completely void of elk!

I walked over to a sunny spot to sit and take a break. All I could think was, “It’s over.” I had spent over 30 days chasing bulls in two states, and although I had passed several bulls, I was still trying to punch a tag. I was mentally and physically exhausted, and ready to go home and spend time with my family.

That thought hadn’t even left my mind when I looked across the drainage and spotted a big herd bull and 20 cows bedded above treeline in a grassy meadow littered with huge boulders. Go big or go home, so I put on my pack and dropped 2,000 feet of elevation and climbed 2,500 feet up the other side to where the elk were.

As I got closer, I could hear the bull bugling every minute or so. The bulls had been very call shy this late in the season, so my go-to method of calling hadn’t been panning out. On top of that, the bull had all the ladies in the world and it was going to be a hard sell. I made up my mind; no calls. I was just going to sneak in silent and see what happened.

At 200 yards, I dropped my pack, grunt tube, and all my unnecessary gear and moved in. When I broke over the little rock rim between the elk and me, I could see several cows feeding and bedded from 75 to 150 yards away. I decided that I’d try to get within bow range of the closest cow and wait it out.

I kept the wind right and waded right up the creek because that was the quietest route. Before I knew it, I was 30 yards from the cow. The bull was bugling and constantly checking his cows. Soon, that big, beautiful bull came around the rock, and as far as I was concerned, he was all mine.

When he turned broadside, I hit full draw. As I released, I knew I was in trouble; I watched in horror as the arrow bounced right off his back and flew harmlessly to the ground. I was heartbroken, but for the first time, I realized I could kill these herd bulls more consistently if I left the calls out of the equation.

Since that time, my elk hunting and elk hunt planning has changed. Here are a few of the things that I have learned while spot-and-stalk hunting. 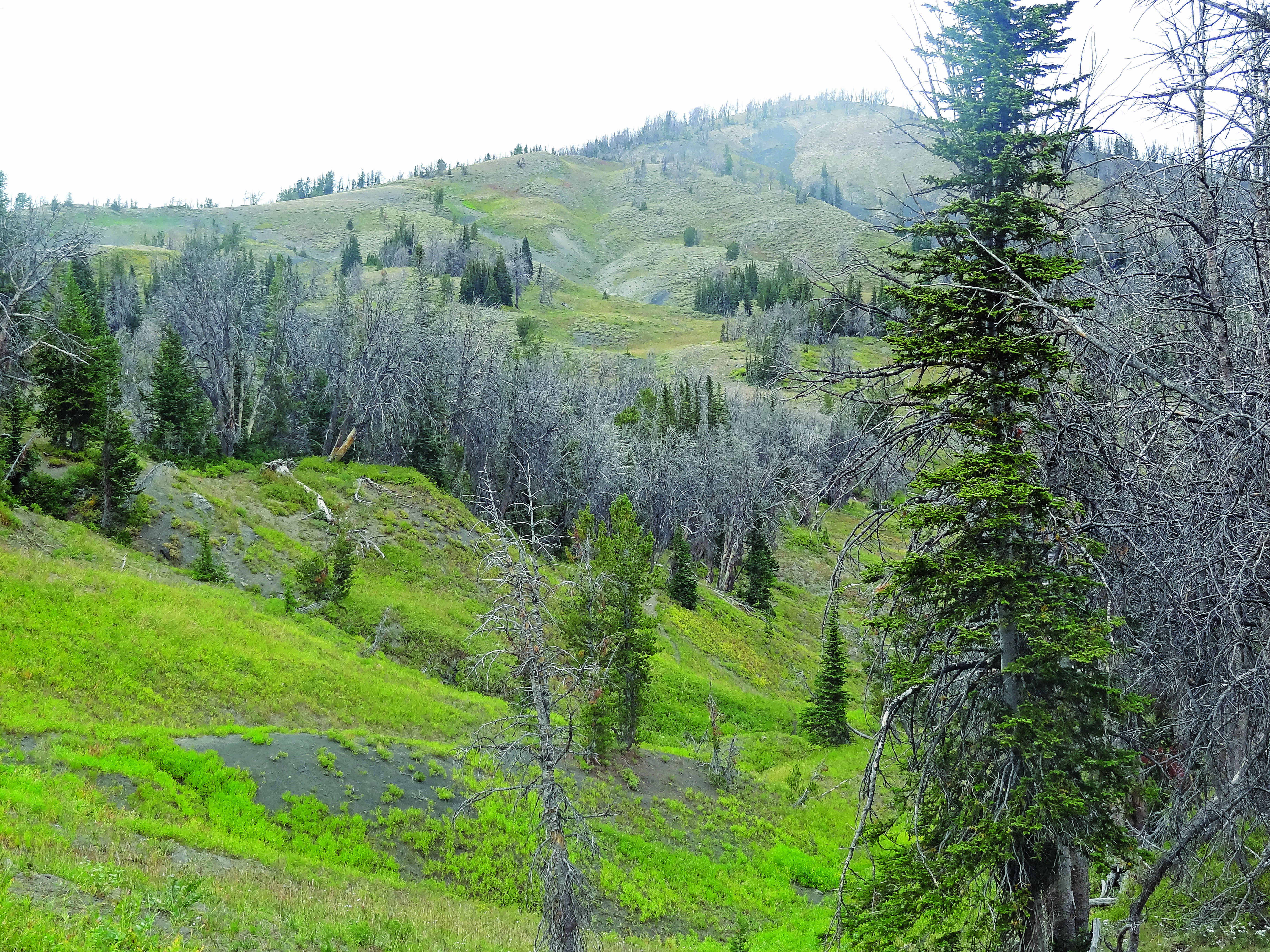 I’ve always been aggressive when it comes to elk, but I relied heavily on thick timber to mask my movements. In the past several years, I’ve started to key in on areas that are more open. This way I can glass specific bulls and move in on them while keeping tabs on them as I move. Elk are big, stinky, loud animals, and as long as your wind is good and you aren’t being careless, you can often times move in closer.

Another great thing about hunting more open terrain is that it isn’t as appealing to other elk hunters. When most hunters think of hunting elk, they have visions of big timbered canyons. Because of this, many times you’ll have the open terrain to yourself.  This allows you to be more patient and move when you’re ready, without the fear of other hunters blowing them out.

Multiple animals: I let the situation dictate how I hunt specific elk. When I spot a bull alone, I generally move in close and call to him. Herd bulls with cows are the ones I often choose to stalk without calling, so I usually have multiple sets of eyeballs to contend with. It’s easy to get tunnel vision and only focus on the herd bull, and that’s a big spoiler on many stalks. Just when you think you’re doing everything right, a pesky cow will let out a bark and send the whole herd scrambling.

Resist the urge to call: This can be very hard to do. I love calling elk and actually consider it my strongest hunting skill. So, although I have had great success calling bulls, I’ve come to realize there are times when I’m increasing my odds by keeping quiet. When you’re spot-and-stalk hunting, your #1 weapon is the element of surprise. Don’t call and lose that advantage.

I have a mouth diaphragm in at all times and will cow call to stop a bull if I have to, but even then, I try to let them naturally stop first. Other than that, once you commit to a stalk, NO CALLING!

Constant ranging: On a stalk, you oftentimes don’t have a visual on the herd, but a shot opportunity can materialize at any time. Because of this, you need to have your rangefinder handy at all times and be ranging trees and rocks between you and the elk. That way if the bull pops out unexpectedly and gives you a shot, you’ll already know the range.

Be aggressive: Being aggressive is always my best advice for bowhunting elk. It can be intimidating for a new hunter, but once you do it, you’ll be a believer. Stay away from unnatural or metallic noises, keep the wind right, and stay out of the wide open. You’ll be amazed at what you can get away with. Steadily keep moving to try and get to or in front of the elk. Be patient: I know; I just got done telling you to be aggressive, but there are times you have to be patient. You have to assess every situation on its own, and sometimes it’s just not “right”. If the herd seems nervous, too mobile, or if they’re just in a bad spot where you can’t finish the stalk, you just have to be patient. This might happen before the stalk or right in the middle of it. Regardless, don’t push it when your instincts tell you it won’t work.

Feeding/milling herds: When putting a stalk on a herd, I prefer that at least part of the herd is up. It’s hard to stalk a bull when the entire herd is bedded down because they’re making very little noise and are on high alert. I’ve also found that it’s difficult to make a stalk when the herd is lined out traveling toward water, feed, or a bedding area.

When the herd is milling around, the bull is working double-time trying to keep his ladies rounded up. For this reason, after you get in bow range of the herd, you can sit tight. More often than not, the bull will come by, hopefully offering a shot.

For me, the best opportunities for spot-and-stalk hunting are: 1) early in the morning when the herd is feeding, or 2) late in the day when a bedded herd is just starting to get up. This can often mean moving in on a previously located herd before daylight or moving as close as you can during the day as they are bedded. Once in position, wait for the right time to put the other lessons to use.

Putting it to the Test

The very next fall, after missing the great bull at the beginning of this article, I quickly got an opportunity to test out my new method. On my first day of hunting, we spotted a herd bull and his harem high on the hill above us. It seemed like the perfect situation to test my theory, so I planned and went stalking with a bow.

It was wide open, but I used the broken terrain to move in. Once within 50 yards of the cows, I tucked in by a pine tree to break up my outline and waited. It wasn’t long until the bull came around and offered me a perfect broadside 35-yard shot. In short order, my elk tag was filled and I had added a new deadly weapon to my arsenal.

Although I still love calling bulls, I find myself much more often sneaking in on herds while spot-and-stalk hunting. I would bet that after you see how effective it can be, you’ll agree.

Another thing I think is huge is boot selection. Unlike when spot-and-stalk hunting in close on mule deer, when many people choose to remove their boots, with elk this can often be hard to do. You need to not only be able to move slowly, but also be able to move quickly to get into position, and that can be difficult in your socks. For this reason, I choose to use a super lightweight hiking boot. One of my favorite boots for this is the Lowa Renegade, but other boots with similar specs would also potentially be good choices.

Sandwiched
Karma Buck
Gunn-ing for Elk
Are You Ready for The Grizzly?
Now or Never
The Under-Recognized Species in the Overlooked State
Traditional Triumph
Hunting Stories
1 2 3 … 10 Next »