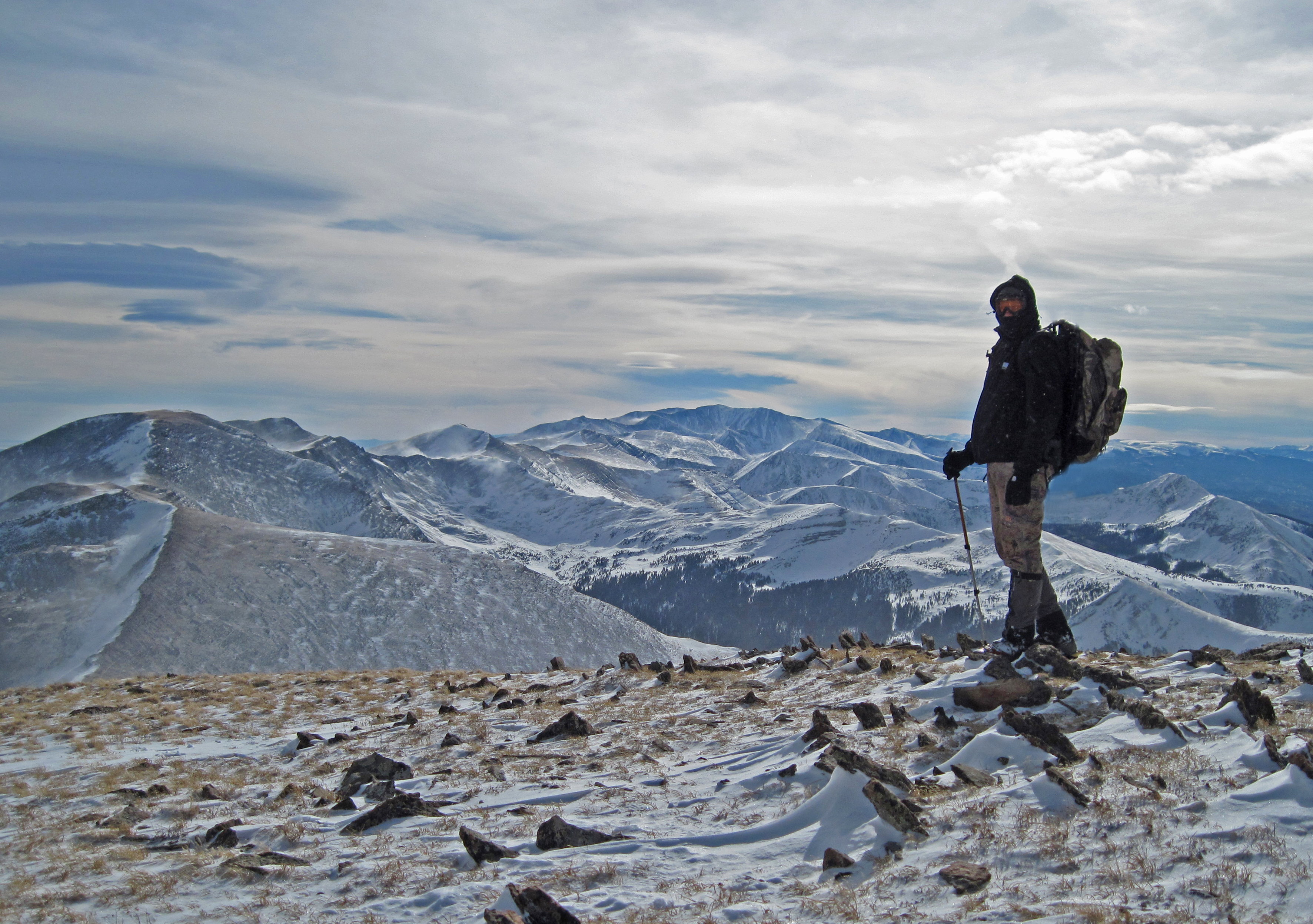 The air was thin and the mountainside we were ascending offered no hints of a summit.  Climbing up this nameless peak was a labor to endure in hopes of seeing up close what we had studied the day before from six miles away. The rounded shoulders of the mountainside we were climbing were conformed of varying sized rocks – some as large as appliances and others like baseballs – all possessing the desire to move downhill as soon as you placed weight on them.

My good friend, Victor Clark, had won the Colorado statewide bighorn sheep raffle tag in the drawing held by the Rocky Mountain Bighorn Society in April 2017. I was lucky enough to come along with him and share the experience. I had enjoyed the same insane luck (winning the same raffle in 2009) and wanted again to share in the journey and experience of searching for that one special ram that would do justice to the opportunity. The previous evening, Victor and I were sitting on a ridgeline miles away, soaking up the sun in a respite from the weather. It was early August and the monsoon was in full swing in the mountains of Colorado.

Earlier in the day, we had been at the same place on this ridgeline when a wave of weather came in with driving rain, lightning, and thunder that soon turned to heavy, wet snow at over 12,000’ elevation. We were on an old mining road in Victor’s side-by-side and quickly made it to lower elevation. We then watched steady rain come down for hours.

The weather broke in the early afternoon, so we took a ride back up to the alpine to glass. A couple of hours into our glassing session, I was randomly scanning distant spots. A bump on a distant peak turned into two skylined rams. More rams started appearing and soon we were looking at a group of 16 rams! This was the largest group of rams I’ve ever seen in Colorado.

The distance bordered upon the ridiculous, but conditions were perfect with cool air, warm light at our backs, and the most incredible piece of hunting equipment I’ve ever used sitting in front of us – the Swarovski BTX binocular eyepiece spotting scope.

This incredible piece of optical perfection, which I’ll detail more at the end of this article, gave us just enough detail on the rams that I knew our plans were lined out for the next day. We needed to get closer and do some climbing to get eyes on the rams.

The climb wouldn’t be easy. It was a six-mile ride up an old boulder-strewn two-track and then a serious 3000-foot climb to be in position to get a better view of the rams.

The morning was damp and clear and we made a good time for the first few hours. It took us most of the morning to make the ascent, but by midday, we were side-hilling the last few hundred yards to a spot where I hoped we could see the rams. I had been watching clouds building to the west and hoped the rapidly growing thunderhead would skirt us to the northwest.

Crawling up to the skyline, we saw the rams bedded within 100 yards of where we saw them last evening. I smiled at Victor, giving him the thumbs up. The effort was worth it and the rams were within view.

Victor started setting up his BTX to check them out, but the wind kicked up and was increasing in intensity. A rumble of thunder was honestly intimidating and offered a fair warning on what happened next.

Having spent decades climbing and hiking the Colorado high country, I have a pretty decent awareness of weather. I told Victor we needed to set up our Hilleberg tarp for shelter and get ready because the weather was coming fast.

We hurriedly slid into raingear and then pulled the Hilleberg tarp out of Victor’s pack. In my opinion, this ingenious piece of equipment is indispensable for hiking/hunting/scouting in inclement weather.

There was a curtain of white approaching with heavy, dark, moisture-laden clouds behind it.  The first hail balls started hitting around us, and at that point, I knew we were out of time. We both quickly crawled under the tarp, rolling the edge underneath us to seal out some of the weather, and lay there as the full force of the thunderstorm hit us.

Thunder roared, lightning flashes illuminated the inside of the tarp, and we laughed at the bad luck. Stinging ice pellets and hail pelted us for almost 30 minutes, and it was uncomfortable lying on the rocks, but at the end of the storm, we simply flipped open the tarp and were both perfectly dry even though hail covered the ground all around us.

The sheep were already on their feet by the time we got the spotter on them. Our reward was just the backsides of sheep horns as they walked over the mountain.

A 1-lb. basic piece of equipment didn’t “save our lives”, but it made the day tolerable and reinforced the importance of simple preparedness in the high country. When you’re prepared, you have the ability to weather the elements. This increases your time afield and the rewards of putting in that time.

I have a few pieces of equipment I consider essential to comfort and success. In reality, all equipment upgrades and improvements that the western big game hunting industry has made and that we’ve embraced go a long way toward making us more comfortable in a place that we as a species aren’t built to withstand.

In late summer of 2016, Chris Denham and I went on a Dall sheep backpack hunt in Alaska. It was there I was introduced to the Hilleberg tarp. Stupidly, I somehow didn’t secure my tent’s rainfly and it was pulled out while going through the brush on the hike in.  Chris, our guide Danny, and I spent the next two nights under a Hilleberg tarp weathering a steady rainstorm and still stayed relatively dry.

We were lucky and thankful for the simple and effective shelter. It kept us out of a potentially dire situation. Now I carry one in my pack all the time in the Colorado high country. After the thunderstorm let up on Victor and I, we had to make our way down on rain-drenched rocks covered with hail. We both had trekking poles and were incredibly grateful considering the slick, steep terrain. Many Western Hunter readers have heard us espouse the virtues of trekking poles for years, but what surprises me is how many people still don’t use them.

While there might be an inherent bias by the younger generation against these “crutches”, I’m here to tell you how important they really are, especially in times of treacherous conditions. The simple act of going downhill in steep terrain means that with every step, you have only a single point of purchase when the opposing foot is off the ground. You’re placing all your health, life, safety, and everything you’ve ever known to trust that the one foot will hold, all under extra weight. It does, almost every single time, but it only takes once.

With trekking poles, you always have at least one additional purchase point while navigating treacherous terrain. They allow you to go at a faster pace, with less risk, and they help with bodily wear and tear. These “tools” also help immensely with climbing by involving the arm, shoulders, and back muscle groups and distributing the pressure and toll of climbing to different parts of your body. I’ve become so accustomed to hiking and climbing with them that I sometimes feel at a loss without trekking poles and can really feel the difference physically after a day of not using them.

For the past couple of years, I’ve been carrying a Z-rest type of folding pad when hunting and summer hiking. These foldable sleeping pads, often weighing in at 10-14 oz., are manufactured by a few different companies and are designed with the ultralight backpacker in mind. I’m not a fan of sleeping on them (they just aren’t enough support) but they’re fantastic for a midday rest.  For late-season hunting, this pad also offers a great insulated, dry spot to sit and glass.

Merino – All Day, Every Day

With all my hunting gear, I’ve gone through the process of downsizing and lightening everything I own and use. Some items are relatively easy choices to make with new gear, specifically some of the clothing lines available.

Probably the most significant change I’ve made was going to merino wool almost exclusively as my base layer on a year-round basis. In summer, I often have the lightest merino wool base layer from Kuiu to wear under a lightweight pair of synthetic mountain pants. Later in the fall, when it’s cold, much heavier set of wool base layer.  An entire article could be written on wool and the incredible nature of the fiber but suffice it to say, that wool base layers are my absolute “go-to” at this point in my life.

With this “lightening process”, I’ve started using the Compact Outdoorsmans tripod. I’ve used various versions of this tripod since Floyd Green first introduced me to it over a decade ago.

When using a tripod, I’ve found that the lightest isn’t always the best. There has to be an acceptable balance achieved between weight, size, and rigidity to support a spotting scope when using it. The Outdoorsman’s Compact Medium tripod, with the Micro Pan Head, is my choice for a nice compromise of size/sturdiness.

The Outdoorsmans tripod is sturdy enough to support something I’ve just started using now. It’s a piece of equipment that, in my opinion, is the single most impressive and revolutionary piece of hunting equipment I’ve ever used: the Swarovski BTX binocular eyepiece.

About 18 months ago, rumors were flying at the winter trade shows about a top-secret project Swarovski had developed. Those of us who trust in the incredible Swarovski line waited with bated breath for the official news. Discussing the potential of what we might see, everyone I talked to about it was hopeful and excited because of Swarovski’s reputation and commitment to excellence. The first time I got behind the BTX dual eyepiece mounted on a 95mm scope, I was blown away. The clarity and ease of viewing an alpine slope two miles away were surreal.  I looked back at Victor Clark, who was one of the first lucky recipients of the BTX and saw him grinning.  “It’s a home run, isn’t it?”

I’m not prone to hyperbole, so let me say without exaggerating that this piece of optics is flat-out awesome. It’s not lightweight or super-compact, but it’s a mountain hunter’s dream come true.

Understand that there’s a time and place for the BTX. I honestly have trouble convincing myself that it is a backpacker’s tool because it’s fairly substantial in both size and weight (50 oz.). I will say that it’s a complete game-changer for all sheep hunting, mountain mule deer hunting, and desert glassing when you are in a situation that makes sense to carry it.

With this type of quality and performance comes a price tag that is commensurate. You can get it for $2769 at outdoorsmans.com. This BTX isn’t for everyone, but for those who understand the importance of proper glassing, it’s a wise investment.

It’s an exciting time to be a mountain hunter. The quality of equipment and apparel we have available to us has jumped dramatically through ingenuity and competition in the industry. The process is now year-round with gear refinement and physical preparations for the hunt.  Enjoy the journey and savor the experience.