It’s inevitable; if you bowhunt long enough and apply for multiple states, you’re eventually going to hunt unfamiliar territory. I’m not referring to hunting a ridge, drainage, or canyon you’ve never seen. I’m referring to completely new areas or units you’ve never set foot in on public land. While I’ve documented how to properly research new areas in the past, this article will focus more on how I hunt new areas and what a bowhunter should reasonably expect to be successful.

I usually have mixed emotions when traveling to a new area for the first time.  There’s something your brain does to you while you’re on the road for hours on end driving to a new area or state.

If you’re like me, you begin to question yourself. Will deer be plentiful or little to no deer at all? The unknown is really something I’m not wired to accept easily. In reality, if you’ve done all the proper research as outlined in previous articles, and are prepared to adapt and dedicate the time into locating animals, you should trust what you’ve already done and allow your research to work for you. Having the proper (positive) mindset going into a hunt like this is extremely important in order to handle potential difficulty.

If you hunt new places, you’re probably going to endure a few mishaps or unexpected circumstances as you learn. A great example of this was a recent trip I endured in a remote unit of Utah this past August.

There were several things that went wrong during that trip that tested my patience. I blew a tire, causing extensive damage to my truck in the middle of nowhere. Additionally, this also damaged wires on my travel trailer, causing me to have to rewire it. I also dealt with a near collision with a herd of cattle at night, a broken prong on my bow rest with no spare and the nearest one 300 miles away (round trip), and not being able to locate my ‘researched camping spot’ in the dark due to the previous issues and having to settle for a different spot next to a main dirt road.

All of these things occurred before I was actually in the area for half a day! I could have easily given in and had myself a pity party, but I’ve learned over the years that good luck will eventually come to those willing to be ready for it.

While I had additional issues come up on my hunt, the end reward was great. I saw beautiful country, lots of different critters, met some nice folks, and was ultimately successful.

I know several hunters who would have become highly discouraged and entered the hunt half-heartedly or labeled the hunt as ‘doomed’ from the start. It’s not by coincidence that those same hunters are often unsuccessful on their bowhunts.

When hunting a new area, you must set realistic goals and understand what the area has to offer.  Your detailed research will often give you an idea of what to expect in terms of animal quantity, quality, and ease of navigation. Far too often, bowhunters place unrealistic goals on themselves and come away from a hunt somewhat disappointed. If you’ve completed exceptional research, establish your goals and maintain them unless on-the-ground info causes you to change those goals.

When I began to research my last bowhunt in Utah, I was amazed at the differences of opinions on what to expect quality-wise in my unit. It ranged from 200” deer to describing the unit as the “land of 130-class bucks”.

When I researched a bit further, I discovered that a P&Y-caliber deer was attainable, but 170-200 were nearly nonexistent in the last six years.  As such, I went into the hunt (without ever setting foot there) with the following goal – hunt the best three bucks I see and don’t worry too much about score. After all, this hunt was designed to be a fun bowhunt and not my usual physically demanding adventure.

When I arrived in the unit, my assessment was fairly accurate. The three best bucks I saw were in the 160-165 range, with a few others in the 150s. I saw nothing in five days of scouting that would officially go over 170 P&Y.  Had I set an original goal to arrow a 180 buck, I would’ve set myself up for failure.

That’s not to say the unit won’t produce such a trophy, but with limited scouting time, my chances of arrowing such an animal were low. Realizing that up front and setting a realistic goal can often change your entire outlook and prevent frustration from overshadowing your experience.

However, sometimes your research will be a bit flawed no matter how extensive you dig into an area. As such, your goals or objectives will sometimes change.

When I prepared to bowhunt the area mentioned earlier, I had countless people recommend that I bring an ATV to navigate some of the road systems and reduce wear and tear on my truck. While I’m not normally an ATV user, I did as advised. They sat in camp the entire time, as the roads were in better shape than expected. Not all of your research or advice will be spot on.

When hunting a new area I haven’t physically scouted, I like to get there about five days before the opener to thoroughly scout the unit. As such, I’ll usually camp in a central location within striking distance of several areas I’ve identified as being potential hunting spots. Being there early allows me to dedicate serious energy to scout and alleviates the pressure of hunting and learning simultaneously.

Additionally, it allows me to see the most current info on what’s in the respective areas, feeding/bedding habits, hunting pressure, access, and best areas to glass/approach.  It also allows me to keep tabs on the best bucks I see and prioritize which ones I’ll pursue on opening day.

On my Utah hunt, my top buck ended up being a buck that was going to be hunted by a bowhunter looking for his first archery kill. As such, I decided to move onto my next best option, some 25 miles away. Luckily, I had camped in a central location, so my daily travel didn’t become too much of a burden

For those bowhunters with limited days, I’d split your vacation days between scouting and hunting. Once you have one or more bucks picked out and habits identified, your chances of arrowing one increase dramatically. If I had only seven days of vacation, I’d spend three days scouting and four days hunting.

Boots on the Ground

No matter how much research you do prior to arriving, just realize that nothing will be as good as having boots on the ground and scouting the area yourself. This is where all your visions and thoughts become reality and give you a true perspective of what the area looks like and has to offer.

On several occasions, I’ve hunted new areas and had visions in my head of what the terrain looked like, only to discover it was completely different than what my mind had envisioned. Google Earth, photos, etc., don’t always depict deer browse and updated water sources. Just understand this and know that physical scouting is also needed when hunting a new area for the first time.

It goes without saying that a bowhunter’s ability to adapt is crucial to success.  Simply put, you’ll either change your plans when warranted or run the risk of failure due to your inability to adapt and overcome.

After speaking to the family of the young hunter pursuing his first-ever archery buck, I quickly had to change my opening morning strategy and hunt a different buck. I could have stubbornly hunted the same buck as the young man, but that rarely equates to success, and truly doesn’t demonstrate the lessons I try to instill in my own children and the bowhunting community alike.

So, I switched areas and looked for the second best buck I saw. It was a good decision – the young man arrowed the mature buck on the first day of his hunt! I couldn’t have been happier for him.

Opening morning found me looking at my #2 buck on an open hillside. After closing the distance to 60 yards, I decided to wait for him to feed closer. However, I soon realized the buck was alert and looking uphill, away from me.

That’s when I noticed a bowhunter, with the wind at his back, directly above the buck, about 100 yards uphill.  The buck blew out of the area and was still running ¾ mile away, heading for a new zip code.

I needed to change my plan again. I quickly gathered up my gear and drove to the area where I saw the third-best buck during scouting.

It was probably an hour and a half after daybreak when I hiked into the new area.  After spotting him and stalking in close, I was able to place a good arrow and he expired within sight.

The ability to change and adapt to hunting pressure directly led to my success. Had I not been willing to adapt or change, my frustration level would probably have gotten the best of me.

Document What You Find

When hunting a new area, I’d highly suggest you document everything you see and learn on a 7.5-minute topo map. This will assist you in retrieving the info for future hunts or when you want to share the info with another person.

I’m fairly detailed with what I document. I’ll generally make a notation like “150 buck feeding morning 2016” on the exact spot. I’ll also document water and types of vegetation. This allows me to recall exactly where the deer were and what they were feeding on, while also providing a potential pattern of deer habits by documenting multiple years.

When bowhunting a new area on public land, without the use of a guide or outfitter, it’s extremely beneficial to do extensive research, but to also adapt or change when warranted. Dedicate enough time to scout before the hunt begins, be mobile, have realistic goals, and remain positive even when unforeseen obstacles occur. If one can do these seemingly difficult but truly simple tasks, your odds of success will increase and your adventure will be more enjoyable overall. 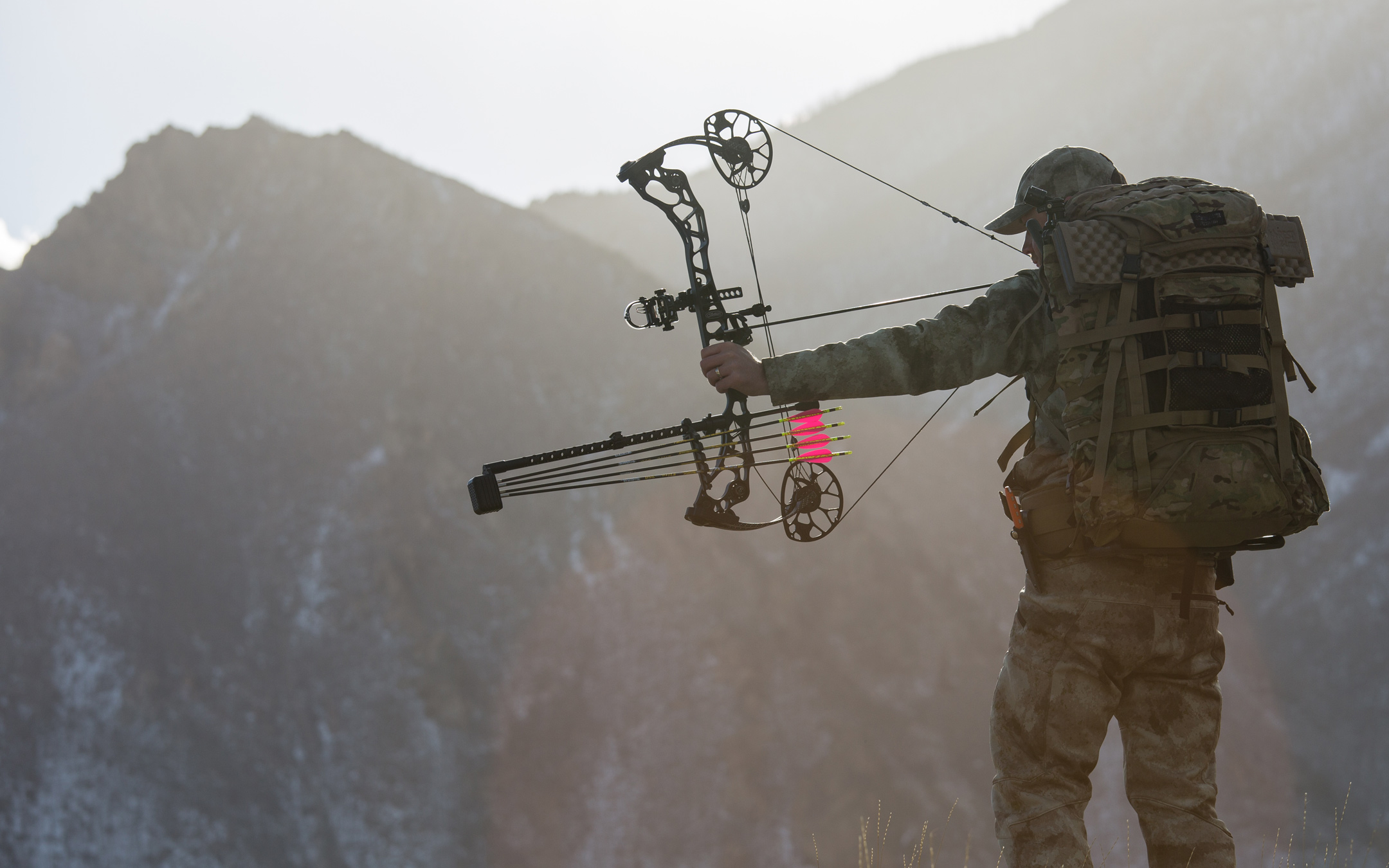 Is It Time For A New Bow?

Javelina: Made for Bowhunting