Backpacking: The Fine Line Between Tough and Dumb.

Know it or you’ll pay a permanent price

I love backpack hunting; it reaches deep into my soul. The demand the mountain places on you, and that which you place on yourself, sharpens you physically and mentally. The accomplishment that comes with it and the feeling it provides is second to none.

However, there’s a fine line out there on the demands you should place on yourself. It can be the difference in a little temporary pain and suffering and a lifelong injury. I personally can attest to this after my 2015 hunting season. Twice, within a matter of weeks, I pushed myself too far. The reasons were different, but the end result the same. Let’s also not forget that these happened on the heels of what was, at the time, the heaviest pack out I’d done up until then – my 2014 elk (story in Spring 2016 EHM).

I had a very short window in which to hunt high country deer, namely opening morning and the next day, before I had to leave for another hunt. I was lucky to take a mature 29-inch 7×7 muley on the second morning; one of the greatest mornings I’ve spent on a mountain. Herein lies the rub. With no time to make two trips without putting a big wrench into already-made plans, I decided to tough my way through an extremely strenuous pack out. I boned out the carcass and took all of the meat, plus the head, cape, and all my gear in one very heavy load, back up a steep slope to my spike camp.

From there, I loaded my spike camp onto the top of the deer. It was a grueling, painful trip. Many times I could only manage a few steps, and finding something to rest on in advance was imperative, because I couldn’t get up with my pack on. The load was between 175 and 190 lbs., and on top of what it was doing to my back and knees with each step, I had to be extremely careful not to lock my leg out for fear of blowing my knee out the back. Just 400 yards from my vehicle, I finally gave out. I took off my pack and offered my lunch back to Mother Nature. I then shuttled the load in two trips the last quarter-mile to the truck. Making that pack out saved my schedule. It also did long-term (see: permanent) damage to my body.

The author, with a nice high country buck from 2014. This load is half of the buck plus gear and spike camp. Loads like this one – and especially anything larger – aren’t “free”. They very much add up toward a permanent toll on your body.

You know, for a man in his early forties, you’d think I might have enough wisdom to learn from past mistakes. Stubbornness is a bad habit to break, I guess. Just a couple weeks later, I was hunting bucks again, and was fortunate enough to take another big one. It was a fantastic evening and the deer fell right at dusk. Again hunting solo, I boned him out and prepped him for the pack out. This time, I had another reason for wanting to take the buck out in one trip. I had seen and heard a ridiculous amount of coyotes that day, and with no trees close by, I had serious concern about leaving half of the load for the next day.

Once again, I decided to tough it out, packing the entire deer and my gear in one trip. It wasn’t quite as bad as what I’d done a couple weeks before, but repeating that heavy pack out in short succession did me no favors. It was a 1-2 punch that maybe I could deal with at 25, but not at 43. The lesson: As self-sufficient mountain hunters, we often put ourselves in extremely difficult and strenuous situations. It’s a part of the challenge we accept and embrace, with the mantra of “That which doesn’t kill you makes you stronger.” However, perhaps there ought to be an asterisk on that quote; something that says, “But it can still permanently injure and handicap you and your future endeavors.”

Just a few months after those two infamous trips, this same guy who has always prided himself on a very strong and dependable back now can’t seem to stand in a stationary position for more than a few minutes without having to either sit down or bend over in a long, drawn-out stretch to temporarily work out the kink. My knees also have a new level of soreness that doesn’t seem to go away. I catch myself favoring one side and then the other going up a flight of stairs. I don’t hold out a lot of hope that either of these conditions are fleeting. No, I’m pretty sure they’re here to stay. Are they a badge of honor? Well, that sounds nice, but I’d rather have my pre-2014/2015 back and knees!

The lesson to be learned and my advice to you young whippersnappers and old stubborn coots is…wait for it…”don’t do that”. Check your ego at the tent door and make two trips! Put a wrench in that other plan. Do whatever you can to mitigate those circumstances and live to fight another day. You’re not as invincible as you think you are, and Father Time is still and will always be undefeated. Hunt smarter. 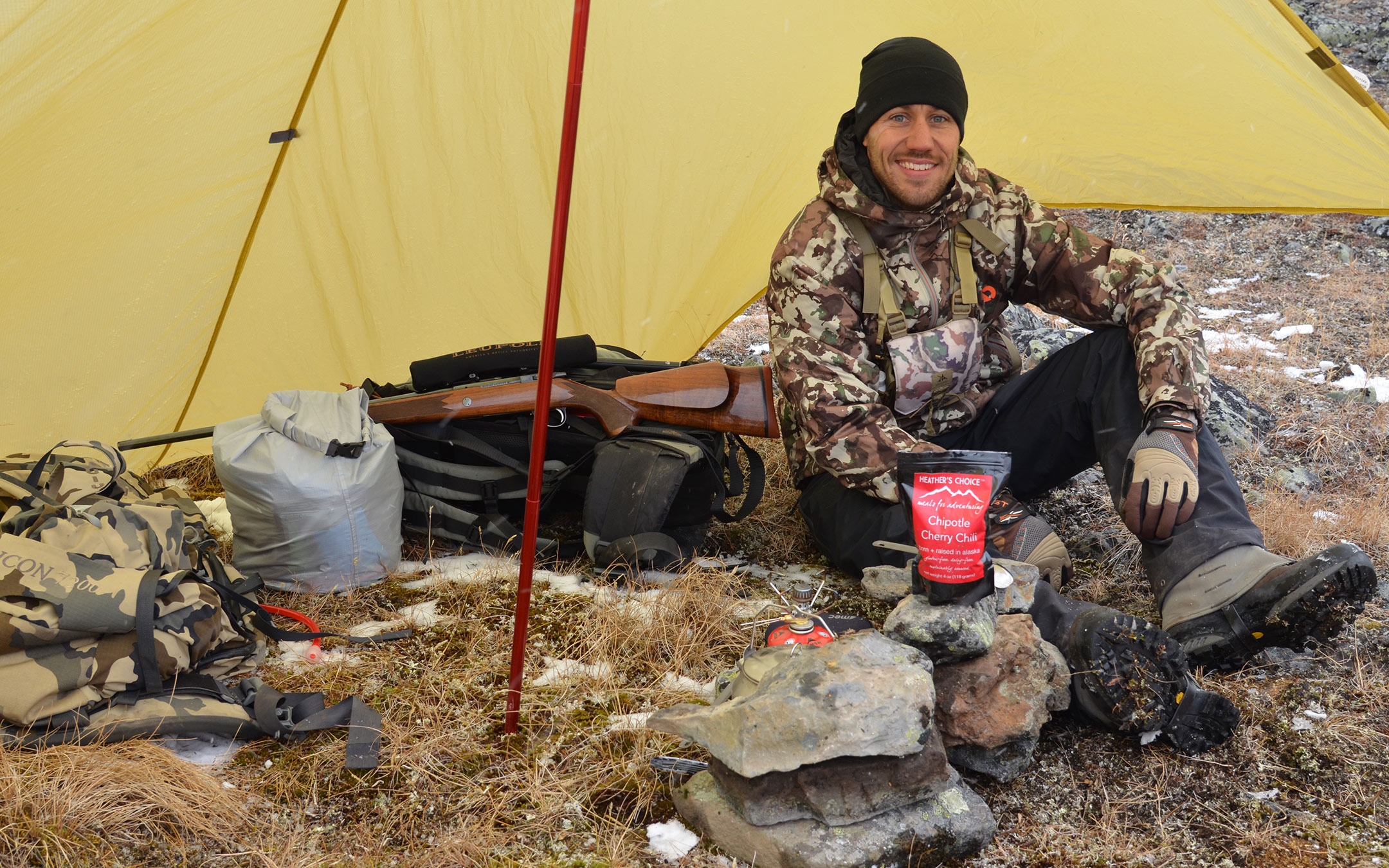 Livin’ Right; Eatin’ Right: For peak hunting performance, quality meals are a must